Since my scrap bin marked BLUE began to overflow last week, I decided to tackle it and make as many different blocks in multiples of five (plus seam allowances) and in as many variations that came to mind.

So far, I've this: one block on the left that is 25" and needs a bit more so it has a seam allowance that will fit with the rest. The block on the right is made up of an assortment of little pieces that were a temptation to toss in the garbage. I kept adding until it became 15.5" square.

A couple more are sitting on a table. One is 15.5  x 5.5 a ready to add somewhere. The other is a strip of skinny pieces sewn on the diagonal that is 15.5 long and so far only 3" wide. They didn't make it to the wall yet.

Yes, this is crazy, mindless and total fun. The bin is still bulging, but loosely and not pressed down. Who will get it? Not the foggiest idea. Nor do I know how big it will be. If it falls short of a good size, I'll dig out some of my blue fat quarters that otherwise have no future! I also have turquoise in this mix so that heart on the left will eventually have some company so it isn't so obviously different.

This may not be a final layout, but with improv, you have to start somewhere!

Posted by Elsie Montgomery at 2:43 PM

We are all delusional - thinking there might actually be a bottom to those bins of fabric! 8-))) Congratulations on making a good start.

I like the results -- so many shades of blue in scrappy combinations! 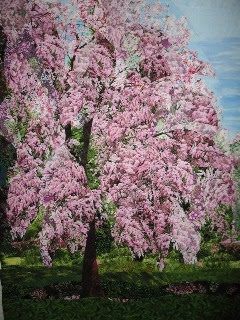